Menu
Log in
Install the app
You are using an out of date browser. It may not display this or other websites correctly.
You should upgrade or use an alternative browser.

Although Developer Updates #18 took a little longer than usual, the development team worked harder than ever in the meantime! If you attended the last livestream, you got a taste of what we have been working on over the last few days.

Alpha 5 is just around the corner, and we are really excited to see all of you playing again, especially the new Tutorial that we have lovingly prepared for you. Now the players will have a completely intuitive experience when playing the game for the first time!

This month is packed with a lot of exciting announcements! Keep an eye on Discord and get your energy drinks for the Alpha 5. The fun will begin!

Terrified of the traps lurking among Ravendawn's dungeons? Then be careful! Magical traps can be even more dangerous!
(The quality is lower because it was slightly resized to avoid ripping) 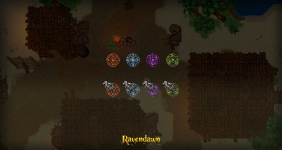 Thanks for your attention and see you next time!
Last edited by a moderator: May 7, 2022